Brrrrdddrup brrrudpt! Yas, is da pig, coming at ya like a bag of nachos, but less cheesy init.

Pig at a gig

Well, this little piggy jus got back from Somersetshire where I’ve been totally at Glasto’. Me and my mate House Hog borrowed me nan’s Micra and razzed outta da city to get back to nature, although I did take da Nintendo with me. Yeah, we gone done the camping like da bosses. Although, HH did set fire to da tent we ‘borrowed’ from Millets with a stray blim, and we ain’t got a warranty.

It weren’t all peaches and RnB tho, as we wuz told that der’d be a lot of mud for wallowin’ in, but all we got was a dust bath and some sunburn, so wuz a bit of a scam.

Cayenne East – Vocoder nightmare (where are you all going?)

CTRL-Alt-Delete – This cedar is ravenous

Mark Ronseal – Does exactly what it says on the sleeve

The Moo – Can we have our fields back, stoners?

Cyclebonce – The grace of maids

Well, more Disco Pig as soon as is most likely, which is possibly never given how long it’s been since the last one.

Aiiieeeee hoof, hoof, hoof… yes folks it’s the biggest night of the year innit! Disco Pig is back with the beats from the renegade master – dey told me I can’t play bass and dat I can’t play drum, but I am ere to tell ya that I’m here actually innit. I’m not a Yankee, I’m a Londoner innit, and on da playground was were I spent most of ma dayze. I got in one little fight and Mrs Disco Pig got scared so she sent me to my Auntie and Uncle’s in Walfamstow innit!

Anyway, der fond trips dahn memory alley asides, Disco Pig is ere to give ya all the bangiest playlist for da bangiest night of the year – Noo Year’s Eve, innit! Disco Pig was in da big demand dis year and as had to turn down some big gigs, including one at dat O2 in his home tahn of Londan innit. Stoked though, cos I is now rocking the bins at Biffordshire’s biggest nightclub – Da Sugar Shed, just outsida of Moistbury on da A67, if you go past der Lamb and Foreskin pub you has gone too far innit. Turn around and hed back a bit, bit more, on da left innit. Yes, da place wiv da big sign up at the front.

Anyways, it’s free Bacardi Breezers all night for da ladies, so get in quick and you might even pull a Bacardi Geezer, that’s me innit!! Nah, don’t fink dat Disco is being all up and unfaithful to da missus and shizzle – she’s out of tahn visiting her poorly piggy gran in Colchester so while da missus is away visiting her poorly piggy gran in Colchester da Disco Pig will play… da top tunes all night innit! Ha ha…

Seriously d’oh Disco Pig is all loved up an dat so it would have to be somefink special to turn his eyes onto anover lady pig innit. Like a couple of drinks and some heavy petting behind da stage innit! Disco knows you ladies will be forming an orderly queue to get ya hoofs on dis bit of quality bacon, but I ain’t bovvered. Da lady I as is da love of me life innit – plus her gran is a lovely lady piggy. She was in da war and all dat. She was an air-raid piggy – ad to squeal when she saw any of dem Nazi planes and dat flying overhead – pwoper hero she was. Her passing, if it should come to dat, would be a sad day in da Disco household innit… mind you she’s facking loaded so let the good times and da turntables roll!

Anyways, listen to me cracking on about nuffink – I has got some vinyl to dig out for tonight’s sugar shed shenanigans! Get der early Pig fans it’s going to be a crackling night of porky phat phun!

Eric Pickles and the Cheese Crew – Leave it Barry, let’s just all have a drink yeah?

West Street Boyz – Lager on my whities, vodka on my loafers

The Kebab Krew – You want everything on, boss?

The Misguided (Ft MC Testosterone) – Yes, she probably IS a lesbian, Stuart

DJ Morning After – Very dark in colour, but it floats

I bin getting the monies in ready fo Christmas coz I want to treat ma nan to a fierce foot spa dey got on special down at Boots. She totally worth it bruv!

Disco pig been working in one of those Christmas seasonal shops init. And man he be getting bored of Christmas songs on da shop stereo! Serious, if I hear Mariah Carey singin’ about what she want fo Christmas one more time, dere’ll be a crime. Nah, but serious, dere will…

Ashes Misery – I put five on it

Megaquake – The thrill of cheese

Grumpy Dad – You can open them after dinner

The Geordie Sores – Herod as a toad

Unauthorised Entry – Stuck up your chimney 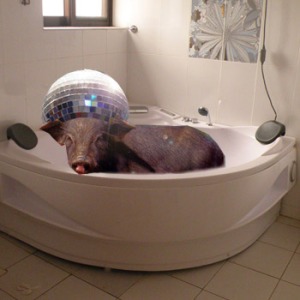 Last week, Disco Pig been helping out his blud, Plumbing Pig, puttin’ in some on-suites in a swanky development in da’ ‘burbs. It was haaaard work and I been sufferin’ with grout-snout ever since. Na’ cool at all.

Anyway, we got tru it listening to some choice tunz on the ghetto blaster. Check out deez beday bangers!

Jazz Chicken (ft. Andy Coleslaw) – Honestly Gertrude, none of us are safe

Brighton Grammar – The song what we did write

Attic Spades – What’s your shed at?

The Young and Hip-Trendy – Amazeballs! Now get out

Ya, das right, it Disco pig comin’ atcha like a bag of Fruitella!

Me and ma pig-brudda’s be all tearing up da clubs fo sho and Disco pig, he been spinning da platterz wot matterz iniit? In fact, Disco Pig been spinnin’ other platterz coz he been doin’ Come Dine Wiv Me on the T of V. Last night, Disco Pig had Delroy Pearson from Five Star, Vicki Michelle from dat Allo, Allo and Leonard Fenton who is Mister Dr. Legg from da Eastenders. Disco Pig won wiv his Moroccan inspired Kefta and chips. Dat some tasty dish I laid on them muthas. Fenton was well gutted.

Anywayz, time for Disco Pig to give out me musical advice from his bass-bin of tail-twirlers. Dis gonna mess ya right up!

Bobby Halitosis – Huffing in ya hand

Consuming the Boat – Even the oars

The Unhappy Camper – Loving in the stoat bunkers 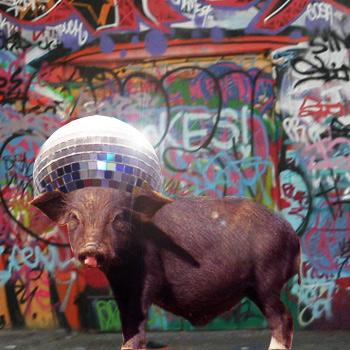 Disco pig, he been layin low for a coupla weeks. Da Solid Hog Crew, dey bin movin in on me patch and kickin up a whole heapa trouble wit ma bruvahs. I been planning a comeback of biblical size man! Gonna hit em wit some of my favourite snout bangers on da weekend. Dem bruvas not gonna know wat hit em! Turn up these tooooooons!

Massive Tea Chest – You say it, I call it, he made it

Distribution – Moving on out (of the depot)

Bastion of Moss – The Kenilworth sessions

Base Model Vectra – Wind up windows and no alloys

The Kenneth Greasy Project– Ghosts in the windmill

Some People – Have no respect (tsk! remix)

The Shoddy Craftsman – Left my drill in the pub again

2pm Leaving the Cinema – I expected it to be dark outside

Peter Feet and the Convivial Jugglers – One up, two up, three up…. awwww 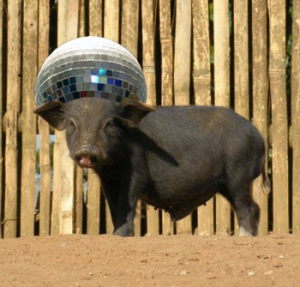 Aiieee – what is da matter wiv dem five-os innit? Disco Pig ain’t been able to update his loyal ungulate followers cos he has been banged up in da slammer innit. On some trumped up charge innit. Dey say, da five-os dat is, dat yours truly was out smashin’ up ‘is hood and rioting an lootin an that when da weather was blazing hotter than blazing squad’s underpants over da weekend. Dey say I knicked two car stereo and dat washing machine innit from Curry’s flecking digical. Disco Pig were nowhere near da joint! Dem stereos were all legally purchased and that for ma sistas birfday. Sheet – Disco Pig ain’t talkin to da haters man – talk to da trotter cos da snout is on holidays, camping in Cornwall or sumfink…sheet

Anydeways er is da bossin, basin toons from my time in da slammer over de summa hear me know my little piglets of passion – get your ear toobes around this stonkers…sheet

Tinchy Temper – It takes a lot to get me cross, but when I go.. goodness me!

The Muggs – Are you mugging me off in the mug shop, mug?

Trip to A&E – Caught my Jacobs on a slated bench

Directions to the chemist – Turn right at the roundabout, just next to Budgens

The Acid Kings – Weeee are the National Westminster Bank Piggeeeess

DJ Chicksticks – If you don’t, you’ll regret it

Moterhome – The Ace of Shovels

Fishbender and the wonky fins – Amanda, the Findus Crispy Pancakes are too hot