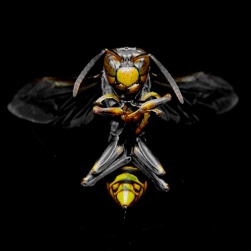 Picked on the wrong wasp fool.

An unbelievable beast it was rarely believed,
Brian’s pet wasp all his friends they agreed,
Such a good pet it was for a young buck,
Though the constant stinging yeah, that did suck

But the wasp was Brian’s for bad and for good,
He cared for it, paid for its education and food,
It wore the best clothes that could be provided,
For invertebrate tailors are often misguided

Stripy it was, bad tempered and surly,
Its owner, dear Brian still loved it most purely,
A habit of jam jars and pub garden cider,
Harsh buzzing of wings and its owner the rider

For Brian you see was a finger-width tall,
For him a matchbox was the size of a hall,
So a wasp was a monster to a man of his stature,
A brave choice of pet and tricky to capture

Yet one day Brian spied in a neighbouring field,
A similar bug but far better heeled,
It was stripy and fluffy so soft on his knees,
It seemed that he’d finally fallen for bees

The sort of pet you could show to your mum,
With it’s nicer demeanour and gentler humm,
All the advantages afforded to wasps,
But none of the stinging or tailoring costs

“I can’t keep them both for I am too little!”
Sighed Brian the height of a badger’s toy skittle,
“Can I abandon my overwrought wasp?”
“It’s not like I owe him. I’ve never been boss.”

So by nightfall Brian rushed out and ran to the hive,
So neat not like wasps nests that were always such dives,
He selected a bee the biggest he’d seen,
Not knowing he’d foolishly stolen the queen

It fought for a while but he resolute,
Tamed the queen bee and escaped with a hoot,
But bees are possessive of their majesty,
The swarm quickly roused and pursued with alacrity

It dawned on him quickly he’d made quite the blunder,
That bees were not pets and would tear him asunder,
The abandonment guilt for his old wasp felt funny,
But not as unpleasant as falling in honey

He’d fallen right off of his striped royal steed,
Into the stuff on which bears like to feed,
It closed round his ankles a sugary glue,
And closer and closer the angry swarm flew

The moral of this as the buzzing grew keener,
Thought Brian is that the grass is not greener,
A wasp is a wasp from cradle to grave,
Angry and surly but incredibly brave

But wasps feel abandonment issues like us,
Although they may hide it not making a fuss,
Too late this epiphany for treacherous Brian,
A thousand stings later he lay there just dying.

Photo by Mathew Schwartz on Unsplash

Good gardenstuffs! Is this site still limping along? Well I’ll be… More poetry possibly in the next decade only on MonkeyBroth. 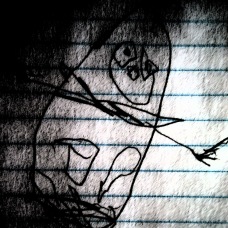 Once it may have been true to a point,
That the roughage was rough and the flample was goint,
But when looked down on it’s true that you see,
The flample was pample and goadingly droit

It once looked quite pretty when viewed in the dark,
The roughage, the pample, hung out in the park,
For sitting on swings and going all weeee,
But the droit came upon them and cut them a’grark

The pample did stample and the roughage did yank,
And across the sandpit the pair they did sank,
To rid them both ever of the nether-seen droit,
They pitched up a coodle and had a stout plank

But the roughage not covered beneath the pitch coodle,
Was exposed to the droit right on to his noodle,
And the pample did peek out a safe word to utter,
But the roughage was lost with it’s memory a doodle

You celestial thing you – by Jenny Hatswitch 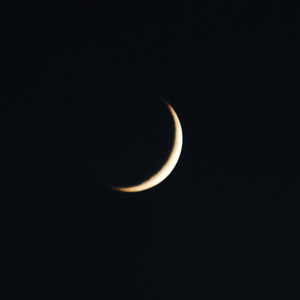 Oh moon why is it that,
At evening time you make me swoon,
When you are gibbous it sends me a flutter,
Your colour akin to some slightly off butter.

Your evening display quintessentially lunar,
After which I feel like having a bhuna,
I know that this sounds so strange to you moon,
But that you’re a rock to me is a boon.

So Moon, never leave me here all alone,
I wish for your heavenly body to be shown,
While I’m not quite sure that I’d be suicidal,
I do feel my mood swings are massively tidal.

A decent buffet is really all a chap wants,

And your average Joe will be in a heavenly lather

But for the love of arse don’t just lazily tip out a bag of twiglets,

And expect THAT to constitute a buffet, I’d rather nosh on piglets’

Buttocks or electrocute myself in the bath with a hairdryer,

Or immerse my whole body in a turned on chip fryer,

Or throw myself in front of the 8.46 from Waterloo,

Or stick a fork in my eyes and give myself a Chinese burn. Oooo

It makes me mad these twiglet loving idiots whose brains are clearly dead,

of taking some time and care about their savoury presentations

Running around all evil and weird with their nasty twiglet machinations,

I’d rather shove a piglet, yes another one, in my ear than gracefully concede to friggin twiglets PLEASE!

Hello? People? What’s so wrong with a decent bit of pineapple and cheese?

You bunch of howling apes with your stupid savoury trees,

Except they’re not trees are they, Mmmm? They are made of erm, actually…

Marmite? Oh marmite did you say?

I quite like marmite, but I’m still going to stick forks in my eyes anyway

Hah! That will teach you, Mum, for

Not serving me a buffet for my 43rd birthday 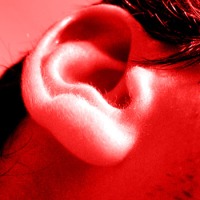 Knees feature quite prominently too,
Clicking and clacking and knobbly and retching,
Although I’d wish for something new,
It’s knees and not even ones that are fetching

Don’t get me started on the kidneys,
They frighten me most and make waking a pleasure,
They make me sleep-punch my Sidney,
He says that it’s fine and to punch at my leisure

The lobes! The lobes! Oh Christ yes the lobes,
Most often lobes scare me half blind,
And while I’m worrying about them in droves,
Stalking eyelashes sneak from behind

So while my night terrors are full to the brim,
With feelings of dread and foreboding,
Body parts full of most murderous vim,
With arms on the side-lines still goading.

The Soon Spoon – by Hilliard Ever-Soslightly 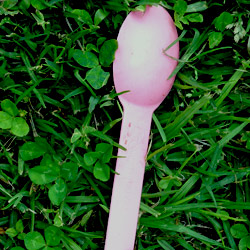 Oooo wasn’t it a bendy spoon,
It made light and yet made gloom,
It stayed all bendy until noon,
And then became so stiff

With a spoon like that you’d be the boss,
You would never suffer loss,
If you did you’d barely give a toss,
And should you care – you shouldn’t

When stiff it could become a sword,
When bendy makes you feel a Lord,
Your subjects ever overawed,
That spoon could crumble empires

Destroyer of worlds the spoon became,
Sheer power of it never tamed,
And you will never be the same,
Now you are in its thrall.

A weapon beyond the realms of man,
It weighs a tonne and yet a gram,
You borrowed it from your old Nan,
Part of her picnic hamper

Eye-level view of a post-pie nap.

Mildred was a bandy lass,
The speed that she could cover grass,
School sports days she was never passed,
Over hundred metres

One day she spied a nice pork pie,
Through the corner of her eye,
And truly could no more deny,
She fancied a bit of that

Fast forward on a decade more,
Mildred’s sitting on the floor,
Within her flat that she abhors,
Too heavy now to race

At first she never noticed signs,
The pies had slowed her record times,
Oft’ passed and lagging long behind,
With pork pie-induced stitches

The Commonwealth, Olympic games,
A distant dream with her to blame,
The bakery fed this hall of shame,
A sedentary life for Mildred

Mildred’s is a cautionary story,
If you yearn for running glory,
Avoid pies and you’ll be hunky-dory,
And probably sausage rolls

Poetry corner. A bit like one of those yoghurt fruit corner things but with poetry instead of yoghurt. And the fruit corner bit.

Posted: 02/05/2014 | Author: dolphinbladder | Filed under: Poetry corner | Tags: Breathtaking poetry, do you like poems or do you prefer scaletrix?, poetry to make you think 'gosh that's good poetry' | Leave a comment

Good morning little lamb have you sent that email yet?

And what about that spreadsheet? You haven’t even started it I bet…

What about that report for the chairman of the board? Come on, get it done!

We’ve got a meeting in an hour, have you prepared the lengthy agenda?

What’s the matter with you today, you lazy little blighter…

Come ON little lamb your appraisal is later today,

We have some feedback for you little lamb, about training and your pay

This is low hanging fruit for you lamb! Surely you realise that?

Are supposed to be used for trotting on grass

Not renewing his monthly security pass

He can’t even open Outlook, let alone send any mail

They can’t input data or create a PDF,

Come ON little lamb get it done, my god are you deaf?

We thought you were a senior pro, when clearly you’re a novice

No chance for David – By Dominic Falafel 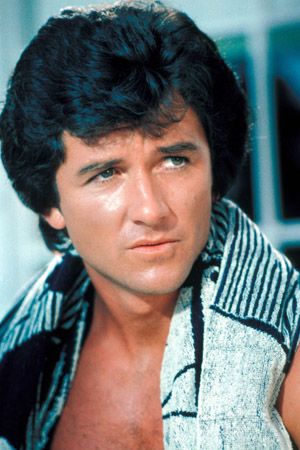 Rags plainly borrowed not bought,
Or pressed,
His gusset was so clearly fraught,
Ill dressed

Shirt flailing against waist,
So tatty,
His sense of unpleasant taste,
Ratty

Tie like a broken snake,
Flaccid,
Over shoulder in his wake,
And vapid

Day of the triploids – By Henrietta B Pencil 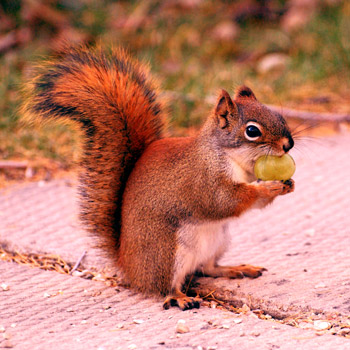 It’s grapes I’ve never trusted,
Though I’ve often tried,
The old ones bitter and crusted,
The young with furtive lies

Now I come to think of it,
Satsumas are such yobs,
Spouting pith as they see fit,
The orange underdogs

The humble apple boasts some form,
Not a stranger to a tiff,
For signed CDs of PM Dawn,
It would sell its Granny Smith,

Rhubarb’s known for starting fights,
And stealing motorbikes,
I hope that they get banged to rights,
The TWOKing little tykes

‘We’re good for you’ you’ll hear them say,
Just show them to the door,
They may be one of five a day,
But they’re rotten to the core