Rock Stars in the morning…

Rock Star Axl Rose’s mom:  Come on honey, or you’ll miss your lift! Do you want me to do your hair sweetums?

This image – Not Photoshopped.

Phew what a scorcher! We hear on the jungle drums that Abele ‘The Face’ Otter has been on holiday showing off the assets that made her a star! She was captured flouting her fish-tinged whiskers at a $2000-a-night exclusive golf resort for the stars in Malta. Her agent told us – ‘She’s just enjoying life since the marriage break-up that cost her so much emotionally. Abele has always been keen on golf and has built up quite the handicap on the greens!’ We say – Fwourrrrrrr!

Meanwhile, Stickleback front man Chas Beaver has been in trouble with the law again after crashing his one million dollar Italian sports car into a roadside Fondue stand on the Las Vegas strip. Dam! Sources tell us that he spent the night in the cells. A Deputy of the Las Vegas Law Enforcement Department told us – ‘He was clearly not in his right mind, but once he’d come down from whatever he was on, he was sure sorry! He signed some photos and left the next morning. He’s basically a good guy.’ We still say that he’s a gnaw-ty boy!

Oscar winner Oscar ‘The Oscar’ Slow-Worm has revealed that he has a secret passion for collecting old mobile phones. On the set of his latest film, he explained – ‘It started off with a few old Motorolas but sort of snow-balled from there really. I have over 700 classic Nokias alone. They really do worm their way into your affections!’ His words, not ours! Dear God… – Ed.

Finally, New York socialite Gnatty Biteitch has been seen stepping out with yet another one of her personal trainers. This week’s hunky-monkey has been named as Barry Gibbon who had a time in the spotlight as the singer from obscure 80’s New Romantic band – The Swing of Things. His appearance alongside Gnatty has certainly caused quite a buzz!

That’s quite enough of that. Can’t believe we’re paying for this tripe… Tabloid Squirrel will be back for more animal-related shoddiness. Unless we can find a loop-hole in his contract that is.

I think I’m in love with Bill Oddie,

It’s not his beard or sinewy body

No, it’s not either of those as nice as they are

What I love about Bill Oddie

Is the way he chortles and chirrups

Every time he pours out the syrup

So glad is he of the sugary snack

You’d think it was a lump of crack

He’s not a fan of a weasel or a rabbit

No it’s birds that he has on his brain

An owl, an ostrich or maybe a crane

Perhaps on a robin he should pour

Some syrup or sugar – more and more

His recipe is bound to be a hit….

Sugared kestrels and a caramelised tit 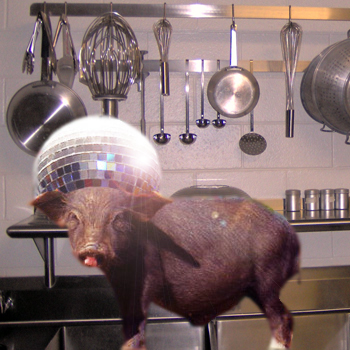 Ya, das right, it Disco pig comin’ atcha like a bag of Fruitella!

Me and ma pig-brudda’s be all tearing up da clubs fo sho and Disco pig, he been spinning da platterz wot matterz iniit? In fact, Disco Pig been spinnin’ other platterz coz he been doin’ Come Dine Wiv Me on the T of V. Last night, Disco Pig had Delroy Pearson from Five Star, Vicki Michelle from dat Allo, Allo and Leonard Fenton who is Mister Dr. Legg from da Eastenders. Disco Pig won wiv his Moroccan inspired Kefta and chips. Dat some tasty dish I laid on them muthas. Fenton was well gutted.

Anywayz, time for Disco Pig to give out me musical advice from his bass-bin of tail-twirlers. Dis gonna mess ya right up!

Bobby Halitosis – Huffing in ya hand

Consuming the Boat – Even the oars

The Unhappy Camper – Loving in the stoat bunkers