Where are they now? – Rainbow’s Bungle

To many he was Thames TV’s go-to bear for children’s entertainment, but behind closed doors, Bungle was a troubled soul. Having been the lynch-pin that won Rainbow the 1975 Society of Film and Television Arts Award for Best Children’s Programme, the pressure to succeed was a cross that he had to bare throughout his professional career.

As with many TV protagonists at the top of their game, it was no surprise that substance addiction was his crutch. In our interview, Bungle bares all…

END_OF_DOCUMENT_TOKEN_TO_BE_REPLACED

What ever happened to – The Microsoft help paperclip?

Remember the little tyke that used to pop up while you were writing a letter and proclaim ‘Hey! It looks like you’re writing a letter!’? If you do, then you’re probably wondering right now where he’s spending his days. After all, he was probably a big part of you missive-typing life back in ’97. By gosh, he knew when to help you start doing something that you had already started doing.

We tracked Clint the clip down to his recently opened R&D company – We research and develop things PLC – and discussed his life, his lows and his triumphs.

Monkey Broth – ‘So Clint, you left our monitors without really saying goodbye. What happened?’

Clint – ‘Hey! It looks like you’re interviewing a fictional character! Well, MB. The split between Bill Gates and me was a shock. One day we just chatting away over a cup of Horlicks, and I made a nice comment about the fact that he appeared to be wearing trousers. Frankly he just snapped. I mean he was really angry. That was that really. I was out on my rounded metallic bit by the afternoon.’

MB – ‘After that, you made a living resetting electrical devices and opening stuck CDROM drives for money is that right?’

C – ‘Hey! It looks like you’re asking me about the wilderness years! Yeah, times were rough. Staples were cornering the market really and there wasn’t much interest in a celebrity paper securing device. You get by where you can and those weird little reset switches built into electrical stuff were a life-line. I was bent out of shape for years though.’

MB –‘Harsh. But you straightened yourself out in the end? DON’T DO IT!!’

C – ‘Hey! It looks like…. Sorry, old habits and all that… I spotted a gap in the market for artificial intelligent household items and started We research and develop things PLC about 3 years ago. Obvious really. We’ve worked for some of the big brands including Office World and their self aware laminators and Ravensburger for a series of puzzles that tell you when you’ve put them back in the box.’

MB – ‘Yes, I had one of those. Didn’t really add to the puzzle experience much.’ 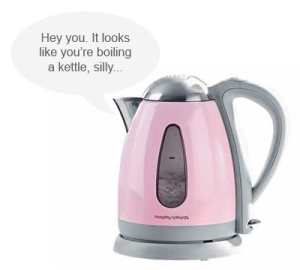 C –‘Well, I’ve we’ve got a contract with Morphy Richards and their kitchen range But I can’t tell you more. There will be a bit of me in it though. You’ll just have to wait and see!’

MB – ‘Thanks Clint, you’re an inspiration to your kind.’

C – ‘Hey! It looks like you’re giving me a compliment!’