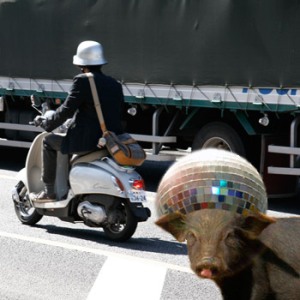 Want a bit of that!

Nice, intro there I reckon! How’s it goin’ ‘me trotter tribe? Disco pig be here spinning ‘d platterz what matterz! Well I have been spinning platterz coz Disco Pig get himself a cushy job down at Nando’s. Peri peri nice! I been workin’ and savin’ up for a sweet lookin’ scootae to impress ma sly sty friends. Dat’s ‘d ladies init! Dey be lovin’ a pig wiv wheels.

Anywayz, I been sniffin’ out some musical truffles for yoos. Bang ‘em on ya sound system…

Kevin Crackers and The Spreads – Both ways lead to Evesham

Shania Twine – Man! I feel like a cheese string

Bruno Saturn – When I was your Planet

The Barely Bare Bears – Quick Louise! The microwave’s on fire!

Thinking Lizards – Has Brenda found that pair of ornamental bees yet?

The Crisp Shirt – by Tracey Ultimatum

Poor Kevin, poor Kevin,
Oh are you a fool?
Did kids tease your beard,
When you went to school?

You used to look neat,
But now somewhat dishevelled,
Your scary wife beats you,
With chicken that’s devilled.

Shirts once crisp,
Enough for the army,
If you had a lisp,
You’d sound far less smarmy.

You need a pet,
But give it some thought,
Don’t buy a big one,
It makes you look short.

Kevin please your little quips,
Far away from being fantastic,
Look at me and read my lips,
Are always tediously sarcastic.

Posted: 09/04/2013 | Author: dolphinbladder | Filed under: Thought for the week | Tags: fudge, I've lost my cardigan no wait there it is, Toilets, Toxic Goo | Leave a comment

As I sit reclining in my solid oak, high-backed leather chair in my study-cum-nook overlooking the majestic Biffordshire Downs in the distance, which are just lightly tipped with a sprig of early spring cloud, I can’t help but think of the hit ITV show This Morning. Hosted by the evergreen Philip Schofield and the impressively margined Holly Willoughby, This Morning offers Christians across the globe a moment to reflect and meditate on some of the deeper meanings of scripture.

Why, only the other morning on This Morning, they featured a fascinating ‘magazine style’ interview with a poor down-trodden lady who recently lost her husband. He died, tragically, while reaching for a tub of Vaseline which for years had been stacked behind various dental equipment in the couples’ delightfully appointed mock Tudor home.

The lady,  fighting back tears told Philip, now leaning in to his interviewee so that the audience were made fully aware of his almost unnatural concern for the poor woman, that the tragic circumstances of her husband’s death occurred early one morning. And it was at that time when she felt his loss the keenest. In essence, she was mourning during the morning on This Morning. The poignancy of the whole tale was not lost on me, but before I could reach for a man-size tissue from the top of my solid oak cabinet, so graciously provided to me by my parishioners, to dab away the emotions which were swelling within me, I was interrupted by an all mighty crash emanating from the downstairs toilette.

Just a few seconds later, I heard the familiar stomp of slippered feet banging their way up the stairs towards my study-cum-nook. By now the owner of the feet had appeared in my doorway and the apparition which stood before me was bathed in sweat from his shoulders down to his ‘just there’ jogging shorts. I have lived with Gumpert, my lithe South American handy man, for many years and his daily battles with even the simplest of domesticated tasks has become part of my waking routine. Never before, however, have I seen him in such a state of unrest as he stood there grunting various Spanish phrases at me in an almost bestial low growl. It wasn’t his sweaty state; no doubt an over-reaction to a particularly spicy goat curry he had prepared for us the previous evening, or the fact that he had chosen to wear the briefest of his jogging shorts that morning which travailed me however. For in his hand he was holding a dripping and quite threadbare toilet brush.

I realised then and there that morning’s perplexing seven down in The Guardian would have to trouble me for a few hours yet as I followed Gumpert down the stairs to examine the cause of his agitated ire. My path from the last step on the stairs was blocked by general tradesmen’s tools dumped there, no doubt, by the builders who had been patching up the wall of the garden shed after Gumpert had, quite innocently, crashed through it after one of his many late evening ‘boy’s nights’ with some of the chaps from the Lamb and Duvet pub in the village.

The builders had been there for many days, and while, as a Christian, I am always keen to promote local trades, their seeming reluctance to finish the job had begun to sting my patience. Instead they seemed more interested in discussing blueprints and technical aspects of the build with Gumpert in his room often into the very small hours. I can only imagine they were creating architectural models of the plans for the shed, given the banging and groaning which had been emanating from Gumpert’s quarters.

In the spirit of my Christian values, I had given the builders full permission to use the downstairs toilette as they went about their construction duties, and I was wondering whether this may have caused Gumpert the stress he was only too happy to display as he waved the toilet brush in the general direction of the aforementioned convenience. My desire to discover the bone of his contention was set against the ungodly waft of thick pungent air which hit me full in the face as I approached the toilette. Undeterred, I pressed on and peered into the bowl of the toilet which Gumpert had been gesturing towards just seconds before.

All my days as a clergyman, even that time I took a missionary position in a women’s’ enclave in Nigeria could not prepare me for the horrible sight which befell me. The entire rim and seat of the toilette was encased in a foul smelling thick fudge like morass of some other worldly substance, the origin of which escaped me. The stench was enough for me to mutter a Hail Mary under my breath and as I recoiled in the horror of it all, I noticed one edge of the sludge, which to my further horror appeared to have a peanut submerged in its brown embrace, had slopped and glooped off into the murky waters below.  Gumpert’s sweaty exertions with the toilet brush had clearly not disturbed the ungodly toxic goo which was clinging joyfully to the toilette bowl in clear breach of my instructions to the builders not to pass solids into its pristine porcelain delicateness.

As I took a step back to consider our predicament a beam of ethereal light suddenly shone on a lead coming from the lawn near the now decrepit garden shed. I do believe the Lord spoke to me at that very moment. As the light moved along the hose I followed it with my gaze and realised it led to an old power washer which had lain dormant in the back of the shed for many years. My path suddenly became clear. Within minutes I was hosing away the builder’s fudgey sins of the flesh and turning the downstairs toilette back to its beautiful and untouched condition. Begone foul half-chewed Snickers bar!

Verily, the Lord doth move in mysterious ways, as do builders, it would seem!