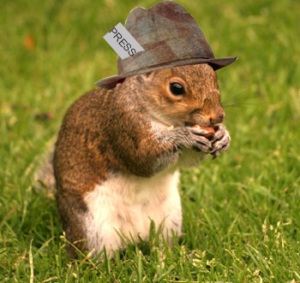 Well it’s been a tough week for pip-squeak POP prima-donna Patsy Dormouse. After the scandal that was her dalliance with her burley builder, she’s been caught taking advantage of a certain swivel-headed DJ, Graham B. Owl. It GOES without saying that he’ll be having his wheels of steel spun this weekend! T-wit-t-woo’d!

Meanwhile, Tabloid Squirrel can report that THE one and only legendary boxer – Foxy Balboa – was caught training in someone else’s ring on Tuesday if you get my meaning. That’s right folks! We can almost hear the divorce papers being shuffled by his long suffering wife, Geraldene WEASEL, who is the heiress of a small fortune of hazel nuts. We think Foxy’s going to be PRETTY red-faced!

Finally this week, soap-star Franski Hedgepig can celebrate a LITTLE victory in the long running rift with Goat Stevens – the creator of Sixpence Woods – when Goat announced in an interview with Copse I Can magazine that he’d been wrong about Franski’s swimming addiction. Ahhh, let’s hope they can patch THINGS up for good!