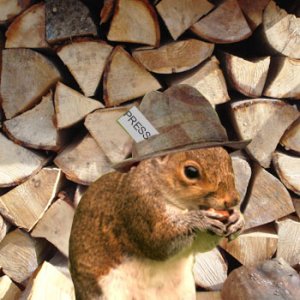 He loves a bit of wood in the morning.

Welcome back showbiz fans and have WE got shrews for you? Yes. Yes we have!

First up, Goaty Rapidcorner has been locking horns with socialite, Elky Alces. Oh dear! Apparently they’ve been seen throwing chicken Tikka at each other at a recent garden party. I’ll BET that didn’t curry favour with the hosts!

In other exciting news, the Woodlouski brothers have announced that they are in pre-production for their latest blockbuster – The Gatetrix – Re-Logged, starring the rather stilted acting skills of Koala Leaves. We can only hope that his latest performance will be tree-mendous (that’s enough timber references thank you – Ed).

Elsewhere in the crazy world of Hollywood (last warning – Ed), YOU may HAVE heard that Robin Weevils has been axed from the remake of Dead Stoats Society due to creative differences. Robin has filed a lawsuit claiming age discrimination. An insider at Toadstone Pictures told us ‘Weevils has a problem with the white powder ya know? You can’t trust a smuck like that. He’s hitting up a kilo of self-raising every day.’

Finally, we’re happy to announce that those two love-birds, Maddy and Curtis Ringdove have hatched two new additions to their happy nest. Little Trafalgar-Square and Shop-Sign Ringdove were born on Monday TO a tired but happy Mom and POP! Mother and Chicks are doing well. Coo-chi-coo you two!

Tabloid Squirrel will sadly be back with more lumber-obsessed gossip at some point probably.