Often overlooked due to their dour markings, the Pocket Snake is surely one of our most fascinating indigenous Biffordshire creatures. 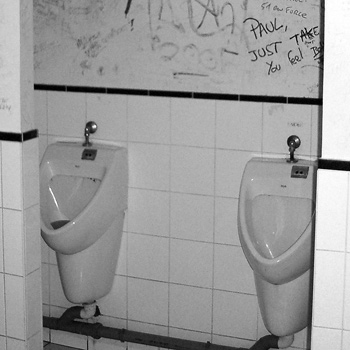 There’s bound to be one in there somewhere.

The uninteresting skin of the Pocket snake is, in fact, one of its greatest defences. In the 1920s, the dandy Biffordshire blades around town would use the quality of their belts as a mark of their aristocratic social status. Only a lowly social climber would ever stoop to a belt made from the pelt of the dowdy Pocket Snake meaning their numbers remained high.

Due to their commonality, and their unusual preferred habitat, they are regarded as a pest by many. The Pocket Snake is attracted by the strong odour of ammonia and thus tend to take up residence in men’s toilets. Indeed, I’m sure you’ll agree that it is almost impossible to use the lavatories at a public house with seeing a Pocket Snake or two.

Because of their unusual choice of residence, the Pocket Snake has developed an extraordinary diet, feasting as they do on urinal cakes. This has caused the species to become the focus of a number of studies headed by the Biffordshire Polytechnic College.

Bryan Flocculation – Assistant Technician explains – “When we first heard reports of the Pocket Snake’s evolving eating habits, we couldn’t understand how the creature had adapted its biological makeup to safely digest urinal cakes. What’s more interesting is that we still don’t. Possibly never will. That’s why we’re studying it I suppose.

“We’ve currently setting up test centres within over 10 local pub toilets so that we can study Pocket Snakes more closely.”

Due to their docility, Pocket Snakes are becoming the pet of choice for trendy youngsters. Many clubs have sprung up to cater for this latest fad and are fast becoming a favourite hangout for the Biffordshire youth.

Dylan O’Ermatron of the Cleft Pocket Snake Handlers explains the attraction – “We get together as often as possible to show off our Snakes. They are such affectionate creatures and love to be stroked and played with.

“They are the perfect pets as they generally don’t grow too big to manage, although our treasurer Clifford has a fully grown adult that is over 12 inches long! That is quite a size for a Pocket Snake!

“They are addictive and difficult to put down as they are lovely to handle – so smooth and sleek. Although I do have to put ‘Little Dylan’ away at dinner time as my Mother won’t let me have him on the table.

“A word of warning to anyone thinking about owning a Pocket Snake though, is to not buy one off the street. I was offered one by a man in a long coat who was hanging around the park the other day. I’m not sure what it was that he showed me, but I’m pretty sure it wasn’t a Pocket Snake. It certainly wasn’t any species that I’ve ever seen before as it only had one eye.”

Once the plaything of the Victorians, the Radar Mouse – Biffordshire’s acoustically over-endowed small mammal – had one of the most obscure of all the roads towards endangerment.

Initially, they thrilled our ancestors with the discovery that, by forcing air through the mouse, a tune could be played. However, after the inventing of the mechanical mouse pipe, the fad of blowing small mammals quickly died out. 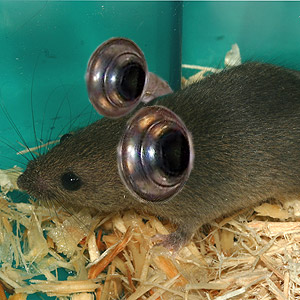 A rare Radar Mouse – residing in a sound-proof booth

Looking like a cross between a common mouse and the ear trumpet used by Madame Fanny in the BBC comedy, Allo Allo!, the Radar Mouse had long cut a curious dash amongst the woodlands of our fair shire.

The few that remain live a life typical to a common mouse but have evolved a curious survival technique. When threatened, they can reverse their talents and emit a loud noise similar to a Chinook gaining altitude. This shocks the approaching predator into thinking that they are about to be sucked into a whirling vortex of rotor blades, giving the mouse ample time to beat a hasty retreat.

Common belief holds that the decline of the Radar Mouse was due to an epidemic of Pirate Radio stations that cropped up in Biffordshire in the early 90’s. The Mouse, with its complicated attenuation was thought to have been able to pick up these off-piste shows over 30 miles away from their source.

Driven mad by the harmonics of Drum ‘n Bass ruff cuts, over 90 per cent of this native species were lost when a stampeding pack of Radar Mice threw themselves in to Buttercludge gorge.

Frank Leyspeaking, president of the Biffordshire Association of Failed Creatures, recalls the scene…

“It were horrible I tell you. They were cuing up to jump!

“It fair makes me shiver to think of those poor little mites, falling to their demise with nothing but the soundtrack of ‘Bump up da eeezee rider caaaaammmm down!!!’ playing in their little heads.

“All those tiny bodies…… Still, I had me wife knock up this lovely set of gloves with the remains. Look! She even kept their little noses on!”

Happily, the Radar Mouse is a creature very much on the bounce. Since the culling of the Pirate DJs back in 2010, the remaining mouse population (believed to have survived by corking their ear trumpets) has been on the rise with sightings cropping up regularly across Biffordshire.

We can only hope that the happy parping of these tiny creatures continues to become more common-place.

Welcome to the first of a new series – nature ramblings with Barry Frontalcheese. Every now and again, mostly if it’s a bit slack at work one day, Barry will be regaling you loyal Monkeybrothers with tales of the countryside. This week Barry sheds some light on the mystically ancient and mystical rural art of going for a poo in a tree.

Arguably there is nothing quite so quintessentially English as the ancient and mysterious ritual of pooing in trees. Many mistakenly believe that it was the Vikings who, while they were having a much deserved break from raping and pillaging, first introduced this wonderful tradition to these shores. However, while pooing in trees is mentioned in the Doomsday Book index under ‘P’, it’s not until much later that the mystically ancient, mystic and mystical ritual of pooing in trees really entered the English psyche.

For those of who you may be from abroad or London, pooing in trees is a form of English excretion usually accompanied by music. It is based on the rhythmic squatting and grunting by a group of men who poo in trees, or the ‘pappers’ of rural legend. Women were never allowed to honk one out at height – following a decree by papal envoys to England who, in 1470, stated that ‘womene who pooeth in the trees will be besette by licce and furevver live in synne.’

Implements such as sticks, swords, handkerchiefs and bells were traditionally wielded by the pappers as they sat and squeezed in the high boughs of oak trees, which, by a country mile, were the pappers of legend favourite receptacle. In a small number of rituals, the act of pushing out some dirty sausages, or the ‘papping’ was carried out while a young virgin girl from the local village stood at the foot of the chosen tree and shrilly blew a clay whistle to ward off both evil spirits and any foul maleveont odours.

Claims that English records dating back to 1448 mention pooing in trees are perhaps inaccurate. There is no mention of papping or pappers earlier than the late 15th century, although early records such as Bishops’ Pappis de bogge de tre mention pooing on tree roots, ‘hooling’ or urinating on bark to ward off evil spirits, and other papping style practices, such as the use of leaves, sticks and badger corpses as rudimentary cleft cleansing devices. Modern historians now agree that these Tudor practices bore the fruit of the modern pooing in trees movement.

These days and quite correctly doing a number two in a big tree is commonly thought of as a mainly English activity, although there are around 150 ‘papping’ groups in Iowa, Arizona and Northern Canada. British Expatriates have also done much to spread the art of fudging on a big branch in the Far East and Australasia, where up until 1963 it was still legal to wipe one’s crack on a live Koala.

Other countries too have their own dumping in undergrowth traditions, perhaps none more so than Austria and the small Alpine town of Vorsprungdurchtechnik. Each year, residents of the town clamour together in a small field to the west of the village to clear their pipes in the thick gorse bushes so renowned in the area. Indeed, a small statue Crappenupindetrees made by Erasmus Rubber in 1768 stands tall and erect as a reminder of the town’s pride in its outdoor brown drowning traditions. Visitors come from far and wide to see the spectacle and its not unknown for protagonists to bake one in the tummy oven for days before the event, to ensure those attending do not leave disappointed. 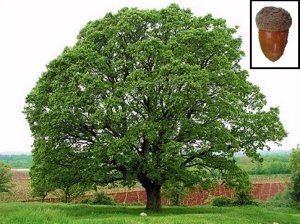 Lopping off bungle’s fingers – an oak tree yesterday and [inset] a fossiled ‘pap’ dated circa 1520.

For myself and all purists though, snipping off Chewbacca’s fingers in a tree will remain an English tradition – one remaining bastion against the legion of foreign imports which so blight our land, like Burger King, Clinton Cards, Curry’s Electrical, pancakes and vegetable samosas.