Posted: 23/12/2013 | Author: dolphinbladder | Filed under: Thought for the week | Tags: goose, guinea pigs for lunch, whacking it with a rolling pin | Leave a comment

As I sit here reclining in my solid oak-backed chair, so kindly provided to me by my parishioners, I can’t help but recall one of the most memorable nativity plays that I very nearly saw. As you may know my work as an Archbishop has taken me across the globe, indeed many of my travels are documented rather lusciously in my book;  Bathtime With the Angels, available now from chains of Glossop’s Books ‘n’ Fags in Fudgebury, Cleft, Moistbury and many other leading Biffordshire settlements.  That notwithstanding this particular moist-eyed trip down Alzheimer’s lane finds me ensconced in the front row of the aforementioned nativity play back in the mid-1980s. It had been a bitterly cold morning if my memory serves me well, and my Madonna inspired lacette gloves had done little to wear off the biting December wind.  Blessedly, this particular nativity had been arranged for charity and some days before I had managed to cajole the organisers to direct all the proceeds from ticket sales and the rather odd mulled ginger beer to a cause close to my heart – the fallen women sanctuary I had set up a few months before.

Being of limited funds, I had to cram the poor destitute women of Biffordshire who came to me seeking refuge, into the shed at the foot of the garden. They were well appointed, despite the rather horticultural surroundings. I discovered that by moving the lawn mower a few metres towards the back of the shed I could fit in three more wretched souls. Hoisting my tandem so that it was suspended from the beams by some sturdy rope facilitated enough room for my latest arrivals, Honey Potwell from Clunge and Mary Quitecontrary who had fallen out with her husband following a rather nasty incident with a frying pan and some edible glitter. Despite my ergonomic re-arrangings, it was clear that if my women’s sanctuary was to succeed then further fiscal benevolence was required. The girls were getting restless and there was only so many times they could watch Poldark on a rather warped VHS on the portable TV I had secured from my parishioners by way of entertainment.

Therefore I had high hopes that the charity nativity play would provide such funds for me to open a rehoming wing and my plan was to offer these poor fallen souls up for adoption to members of the general public. However, just as the play was about to begin a stage light had crashed from the roof and had landed squarely on both the Krankees, who had driven down from Falkirk the night before to take part. Ever the professional, Fred Dinnage, who was due to play the Archangel Gabriel, was determined that the show should go on, particularly I suspect, as his mum had been up all night making wings out of a pair of her old tights. But my spirit to continue had been crushed along with the poor Krankees and despite Fred’s and Fern Britton’s enthusiasm to put the show on, I took the difficult but necessary decision to call the event off. It was a heart-breaking drive back to my parochial quarters although Jimmy Cricket’s anecdotes certainly made the journey go quicker. I was pleased I offered him a lift home, even though he insisted on wearing his back end of a donkey costume which he had been so looking forward to performing in.

My misty eyed reminiscences were unfortunately then interrupted by Gumpert, my live in help. Regular readers of this column will be only too aware of the lithe South American’s firebrand nature and his irritation this afternoon, the eve before Christmas, was as tumescent as I could remember. He had chosen to wear the new Christmas jumper his mother had sent over from South America for him as a present although the image of a guinea pig being roasted over a spit which adorned the front of it, was, to European eyes at least, not particularly festive. I had thought to myself earlier that morning that he may be a little jaded as I had heard him late into the night playing what I imagined to be Twister with his special friend from the village. I can only surmise the boys had been playing for some high stakes as there was certainly some enthusiastic shouting and grunting coming from Gumpert’s quarters until the small hours. Given that it was Christmas I decided to treat the pair of them to some late evening hot chocolate, but despite knocking on Gumpert’s door for a good five minutes it went answered. Pushing the door ajar I left the steaming mugs of cocoa on the chest of drawers. I could see that it was indeed Twister they were playing as Gumpert had managed to take a dominant position with both his feet straddled behind his kneeling friend. As they had both removed their tops I made a mental note to turn the heating down a notch or two, the poor fellows must have been boiling!

Now stood there in my conservatory cum nook, Gumpert imparted the cause of his ire and beckoned me downstairs. As I followed him into the kitchenette his discomforts soon became plain. There, wedged twixt the oven doors was our Christmas goose, so kindly provided to me by my parishioners. Gumpert explained in between drags of one of his foul smelling cigarillos that despite his best efforts the goose would simply not fit into the oven. He had, he explained, been whacking it with a rolling pin for the past ten minutes in order to reduce its size sufficiently for it to squeeze into the oven, so kindly provided to me by Witches Ovens of Clump. Our Christmas meal, it would appear, was doomed to failure before it had even started.

As I mulled over our Christmas conundrum, a sudden beam of light shone through the window before resting on my neighbour, Mrs Arbuthnot’s back door. I do believe the Lord spoke to me at that very moment. Suddenly my path become clear. Why, Mrs Arbuthnot’s huge AGA would offer plenty of room in which to roast our meagre bird. With a cheery hello Mrs Arbuthnot was only too glad to welcome us both in, particularly as I suggested doing so would merit her a mention in volume two of my upcoming autobiography. Mrs Arbuthnot and I spent a most joyous afternoon preparing the Christmas goose and sipping dry sherry, while Gumpert and Mrs Arbuthnot’s nephew, Clarence, busied themselves playing Twister in the front bedroom.  What would have taken many hours of sweaty goose carcass machinations had, in fact, only taken an hour and a half on a high setting. Verily the Lord doth move in mysterious ways!

Volume two of Dr Robert Carolgee’s autobiography The Angels offer me Nutella will be available on pre-order next Wednesday and he will be signing copies at Glossop’s Books ‘n’ Fags from Thursday. Asthmatics are asked to book in advance. 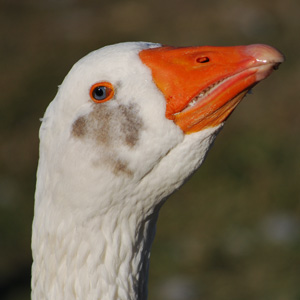 A great companion for any young lad.

Framley such a nice young boy,
Received a multitude of toys,
Upon his birthday – why so sad?
What troubles this upstanding lad?

When asked just what the problem was,
He told them that it was because,
A waterfowl was more required,
A feathered friend was most desired

“The other gifts are nice and all,
I love the prostitute and ball,
But I implore I am so fond,
The thought of geese upon our pond”

His loving parents racked with guilt,
Had also purchased him a quilt,
But what was used to stuff this gift?
Their answer back was not too swift